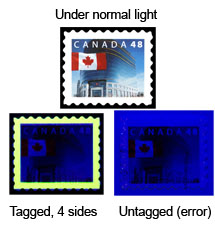 Tagging is the phosphor coating on stamps used to activate automatic mail-handling equipment. This may be lines, bars, part of the design area or the entire stamp surface. Some stamps are issued both with and without tagging. Catalogues call them tagged and untagged. In some cases, the tagging is omitted in error.

An ultraviolet light is usually required to identify tagged stamps, but with experience you may be able to detect the tagging under normal lighting conditions by holding the stamp at an angle to a light source.

The first tagging in Canada appeared in 1962 on the 1c-5c low-value Wilding definitives. This tagging was called 'Winnipeg tagging' because it was introduced and tested in Winnipeg, Manitoba. Winnipeg tagging is phosphorescent bars applied vertically - 1-bar (left, centre and right) or 2-bar. The difference number of bars was to distinguish between local and forward mail. Winnipeg tagging was discontinued in 1973.

Starting in April 1972, 'General tagging' was introduced in Ottawa, Ontario and has since become the norm. Initially, two types existed: OP-4 and OP-2. The former migrates and can spread onto other stamps. It was used only on stamps printed by BABN.

General tagging was initially applied in vertical bands down the perforations (giving us 2-bar tagging). Two stamps, the 88c and 90c Fruit Trees definitives appeared with 3-bar tagging (an experiment for international mail). It is now the norm to have stamps tagged on all 4 sides. This allows the machinery to detect the tagged stamp regardless of whether the stamp is affixed to the envelope vertically or horizontally.

General tagging fluoresces when exposed to ultraviolet light and has a yellow-coloured appearance.

Phosphor - 'invisible' ink (tagging) applied to the front of the stamp in vertical bars (one, two, or three have been used on Canadian stamps) or around all four sides of the stamp that, when exposed to ultraviolet light, activates a sorting and canceling machine.

Canada issued its first phosphor tagged stamps in 1962 in readiness for the installation of a British-made letter-facing machine in Winnipeg, Manitoba.

It fluoresces a yellow-colour when exposed to ultraviolet light. Two major types exist: OP-4 and OP-2 (the former migrates, or spreads, throughout the stamp and will bleed onto and through other paper that is in prolonged contact with the tagging).

Winnipeg tagging - the name given to the phosphor tagging introduced on January 13, 1962 due to the city where it was used: Winnipeg, Manitoba. An ultraviolet light is required to detect these.

Click for a large UV-light image of the 3c, 4c and 5c Wilding Winnipeg-tag stamps. Note that Winnipeg tagging can be a bit difficult to view; sometimes it may be seen under regular lighting when viewed at an angle. 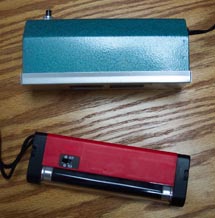